Showcase: Hasslefree's Mckenzie (a) and Grant

So here are couple more figures from my collection... After painting Debra I decided to add a couple more figures to my Cadian Imperial Guard.  Grant was one of the earliest figures from Hasslefree. I've often thought he would make great Sly Marbo but I've never gotten around to fielding him as that. Mckenzie I've always figured for a driver who's gotten out of her vehicle and is about to defend herself!  There is, by the way, another version of Mckenzie with a rifle which I'll post in the future.


The painting on both figures was quite straightforward as they're basically just three colours. Together they show off a couple of simple drybrushing techniques quite well.  Drybrushing is when you wipe of most of the paint from your brush until there's almost nothing left. The brush should basically be dry rather than wet, hence the name of the technique. This can be a bit hard on brushes so either use an old brush, a cheap brush or a purpose made drybrush! 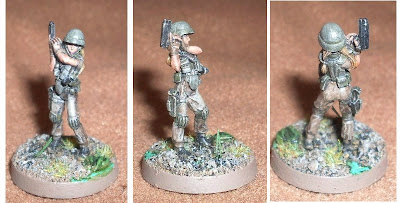 I painted Mckenzie's fatigues brown, probably Graveyard Earth by the look of them, and her armour and accessories in Olive Drab. I then drybrushed all of them with Khaki with an old standard size brush. It's a quick and easy way to give them some texture and highlighting.

You get a lot of bald, tough guy miniatures - not least of which are all the Space Marine sergeants I've ever met!  Whilst there's nothing wrong with that, it isn't really hard to give a figure buzz cut. Honest! I did Grant's hair and stubble by dry brushing Scorched Brown lightly onto his head. Obviously you need to use a small brush for something like this! So long as you do it gently and build it up gradually it's not hard though. When you're painting it's always easier to add more than to take off excess paint.  So long as you keep some flesh tone on your palette you can always go back and touch up the skin afterwards if you need to.  Cleaning up mistakes is something every painter does - including the pros!